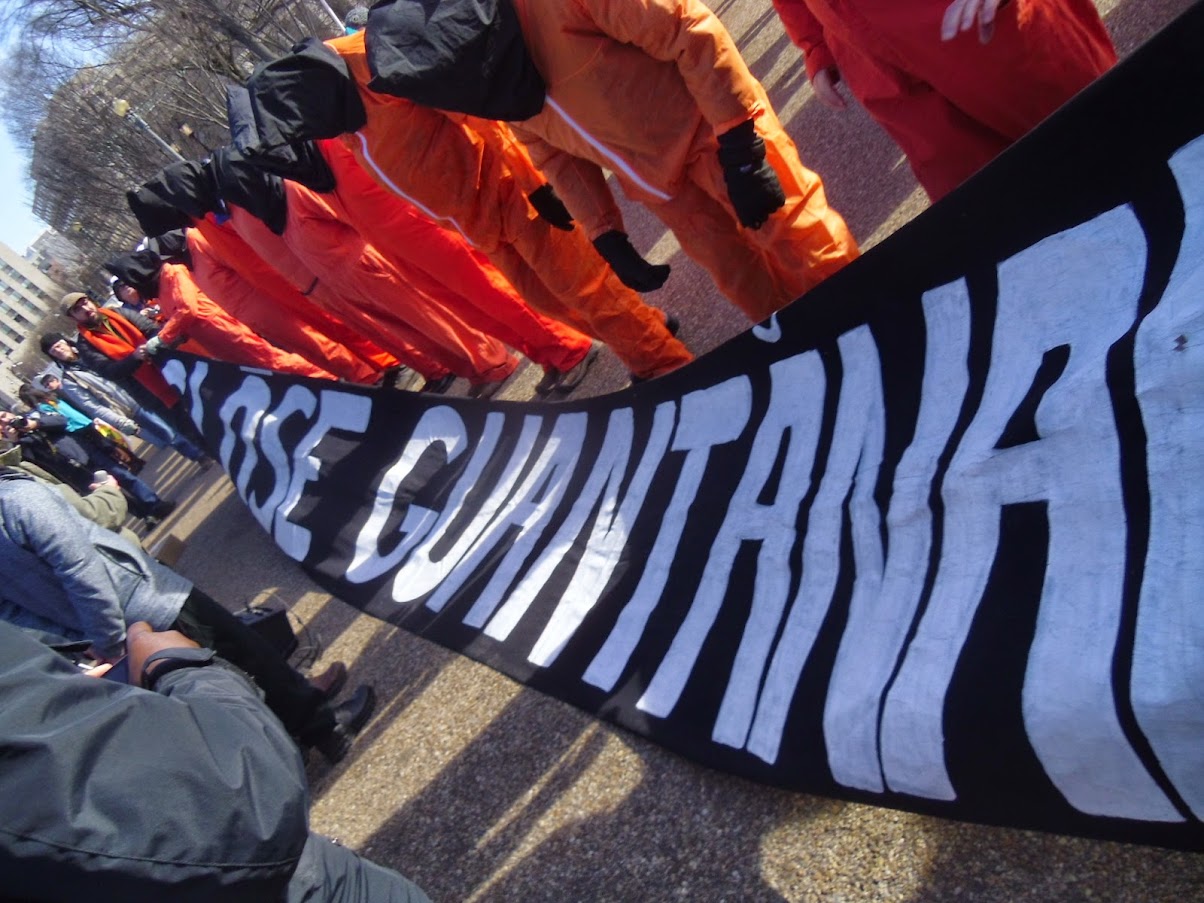 Montgomery County Civil Rights Coalition is joining national groups including “World Can’t Wait,” Amnesty International, BORDC/DDF, the Center for Constitutional Rights (CCR), and the National Religious Campaign Against Torture (NRCAT), and others in calling for action next week on January 11th, the 14th anniversary of the establishment of the Guantanamo internment camp — a stain on American history and respect for the rule of law.

You can join January 11th actions at…

From the “Call to Action” (NRCAT link):

…Now is the time for Obama to accomplish a central goal of his administration by closing Guantánamo. There is today a renewed climate of fear and hate reminiscent of the post-September 11 mindset that led to torture and indefinite detention in the first place.  Guantánamo is the bitter legacy of a politics of fear, which must be rejected.

This is the President’s last chance to keep his promise and close Guantánamo.  If he does not do so, there is a real chance that the current detainees will die there, and that more detainees will join them.

The statement also makes the important points that President Obama should order all agencies to read the Senate Torture Report, and have the Department of Justice open investigations into the criminal conduct of many involved.

While there’s been a spate of good news recently — Shaker Amer‘s release on October 30, the announcement of the release of 17 more detainees on December 17th — that will still leave 90 detainees incarcerated without trial at the U.S. naval base in Cuba… many despite being okayed for release years ago.  On Saturday, the New York Times editorial board observed that failure to release many of these prisoners was nothing short of “insubordination” by the Pentagon.  To be sure, recent legislative and political maneuverings have been complex. But at the end of the day it can be as simple as this chilling absurdity, tucked away in a recent Rolling Stone article by Janet Reitman (“America’s Shame“):

During one recent set of 9/11 hearings, an attorney for one of the defendants said she couldn’t advise her client of his rights “because I frankly don’t know what they are.” The judge didn’t seem to be sure either.

A place where no one is sure rights even exist any more is not a place to get used to, it’s a place that’s far too dangerous to all of us.  Join us next Monday to tell the White House, Congress, America, and the world: either give Guantanamo prisoners a fair trial or, if that isn’t possible, let them go. And close Guantanamo now.

3 Responses to MCCRC joins “Close Guantanamo” call to action next week; see you at Takoma Metro