Law Enforcement Officers “Bill of Rights” reform hearings: a report — and next steps

Among these 17 were three bills to alter the internal process under which complaints against police officers are investigated and reported. The most prominent, HB968, would amend the state’s Law Enforcement Officers’ Bill of Rights (LEOBR), a statute described by ACLU-Maryland attorney David Rocah as one of the two “most extreme” such documents among the “14 states in the whole country that have this kind of ‘bill of rights.’” 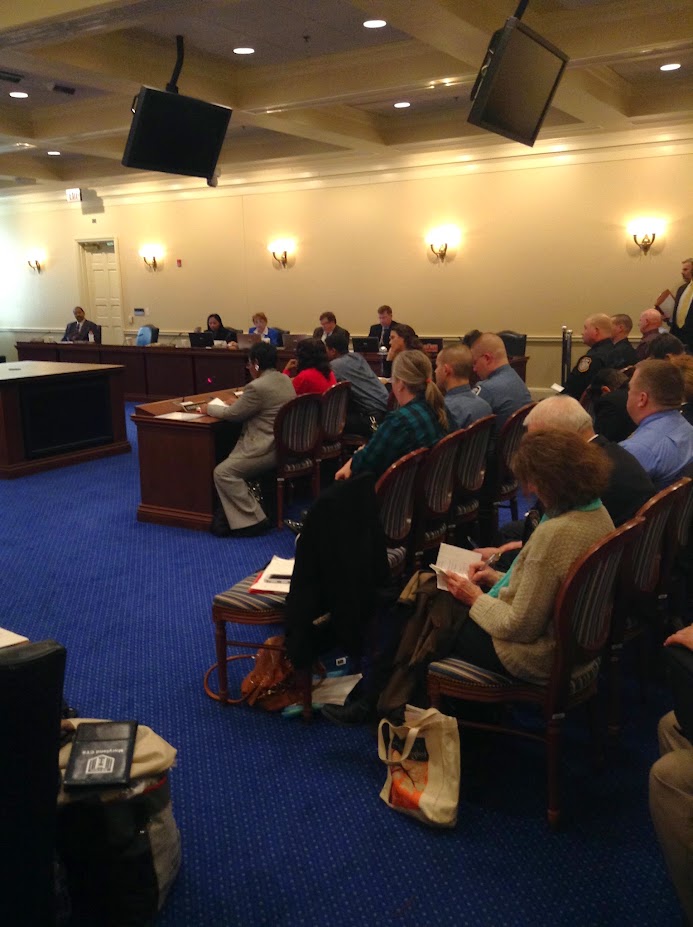 Bill sponsor Jill Carter (D., Baltimore City) called the 41-year-old LEOBR a “shield” against appropriate investigation of complaints against officers, even those alleging brutality and involving the death of people in police custody. She cited as “patently unfair” the 10-day rule, “the gap” that allows an officer to be given witness statements and any other evidence gathered in the case prior to giving his or her own statement.

Moreover, she added, the “lion’s share of cases are never charged.” One reason is that the LEOBR gives citizens 90 days to file a complaint, a deadline that would be thrown out in the reform bill. “It’s not enough time,” Carter said. “The victim could be hospitalized, in jail, traumatized, unfamiliar with the process.”

Another reason is that citizens’ complaints may simply be ignored or turned against them, as was the case with Liz Howard, who testified that her filings were met only with hostility. “I was the one investigated, not the police officer.”

Marion Gray-Hopkins did file a timely complaint in the case of her murdered son, Gary, but the state’s attorney “failed to place an attorney who had ever prosecuted a murder case,” and the grand jury did not indict the involved officer. The status quo, she said, enables police officers to be “judge, jury, and executioner.”

It also enables repeat offenders, Abdul Salaam observed. He recounted a vicious beating he’d received in his driveway in July 2013 that sent him to the hospital and terrorized his three-year-old son. He later learned, from individuals he described as “good police officers,” that his assailants were known for that kind of behavior. Seventeen days later, the same officers who beat him were involved in the beating death of Tyrone West, whose sister, Tawanda Jones, testified that the officers were given immunity and 152 days to make their statements.

Another mother of a slain son, Olubunmi Comfort Olidupe, addressed some of her comments to the sea of police officers in the hearing room, “I say to you, if you see your comrades doing something bad, say something.”

Police Have Their Say
Police officers and representatives of police chiefs and commissioners and states attorneys from across the state of Maryland testified in force against the LEOBR reform bill, which they characterized as violating the due process rights of law enforcement officers. The LEOBR, they said, had served them and the citizens beautifully for 40 years.

Some dismissed the reality of those ill-served by the current system as “emotional,” presenting statistics on the numbers of police officers disciplined or fired in various jurisdictions as proof that justice was being done.

Some scapegoated Baltimore City, claiming that its unique failures were being used to saddle every jurisdiction with unnecessary and unfair (to law enforcement) so-called fixes to a system that was not broken.

Next Steps
Notwithstanding the police opposition, it may still be possible to get a favorable committee vote on the LEOBR reform bill. Kathleen Dumais (D., Montgomery County), committee vice chair, pledged to hearing attendees during the testimonies of those seeking redress that “this committee will work on the bill. It is not all or nothing. We will work through compromises.”

Let’s hold her to that — use our action alert to advocate LEOBR reform to the Maryland House and Senate leadership, and to our Montgomery County delegates and senators on the relevant committees. (Go ahead and email and/or call them even if you’re not from their district — just be up front about being from a different part of the county or the state.)

For more on the LEOBR reform bill – including text of the matching Senate version of the bill — see earlier posts including ”LEOBR reform in Maryland — what is it, why is it needed?  Among its most important provisions are ones codifying, statewide, the possibility of civilian involvement in the police officer disciplinary review process, and, as noted above, ones ending the 90 day complaint deadline and the 10-day period during which officers facing complaints can delay obtaining counsel and wait to see witness testimony before being interrogated themselves.

5 Responses to Law Enforcement Officers “Bill of Rights” reform hearings: a report — and next steps