Save The Internet! with Popular Resistance

Advance elements of the banner-holding, demonstrating wing of the “Save The Internet” movement met tonight at Marx Cafe for beers, music, and an update about recent welcome ‘net neutrality’ news (and a look ahead to the next few weeks) from PopularResistance.org‘s Kevin Zeese.

…I am proposing that the FCC use its Title II authority to implement and enforce open internet protections.

Using this authority, I am submitting to my colleagues the strongest open internet protections ever proposed by the FCC. These enforceable, bright-line rules will ban paid prioritization, and the blocking and throttling of lawful content and services.

…including mobile broadband. In his blog post today (Major Historic Victory For Internet Freedom: The Fight Continues) recalling months of direct action activism, Zeese called the decision a “victory of people power over corporate power, indeed over one of the most powerful lobbies in Washington, DC the telecom industry.”

In his remarks last night, Zeese acknowledged that while PopularResistance.org has been working on the issue for just ten months, other groups — like FreePress.net, also represented at the gathering — had been working on it for years.  Between now and the final decision at the end of the month, though, it may be that the technical expertise and online savvy of groups like FreePress, DemandProgress, EFF, EPIC, and Fight For the Future will need allies like PopularResistance.org and other groups emphasizing people power on the streets.

Without going into details, Zeese spoke of making cable company opponents to net neutrality “toxic” in public opinion — which may not be too hard a sell, actually.  As net neutrality opponents push back desperately in the next few weeks before the February 26 decision, I’m guessing we’ll see Zeese, co-director Margaret Flowers, and their supporters doing what they do best: reminding Washington, D.C., that it must at least occasionally listen to and heed the people and not the cable companies of the United States. 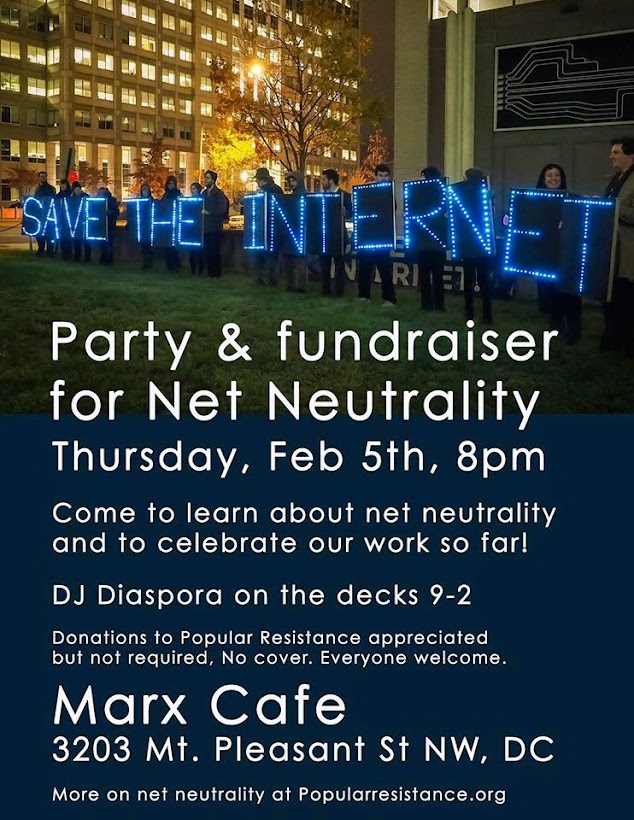 This entry was posted in Post and tagged internet. Bookmark the permalink.

1 Response to Save The Internet! with Popular Resistance