One month left in the Battle for Net Neutrality

What is net neutrality?  It’s the idea that no bit of data on the Internet highways and byways is more privileged than the next.  The ACLU puts it this way: it’s what makes the Internet “a place where you can always access any lawful content you want, and where the folks delivering that content can’t play favorites because they disagree with the message being delivered or want to charge more money for faster delivery” — the way companies like Comcast or Verizon would like to do.

For his part, John Oliver (“Last Week Tonight”) puts it this way:

Cable companies are putting pressure on Congress to direct the FCC to make the decision they’d like on the future of the Internet — against net neutrality, for multi-tiered service provisioning.  So the Internet wing of the civil liberties community — Fight for the Future, EFF, DemandProgress, and other groups — are banding together to warn that the “Battle for the Internet“is on:

On Feb 26 the FCC will vote to save net neutrality or let Comcast and other ISPs create Internet slow lanes. Some members of Congress, on behalf of their Cable donors, are trying to stop the FCC from protecting the Internet we love. There isn’t much time to stop them, contact them now. 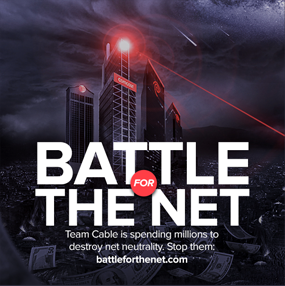 The “BattleForTheNet.com” site helps users see how their legislators stand on the issue.  It also makes it easy to email, tweet, and (most importantly) phone Senators and representatives to let them know you support net neutrality. Spoiler alert: the Maryland congressional delegation isn’t all it could be. While Senator Cardin and Representatives Edwards and Sarbanes are in the net neutrality camp, it’s not clear yet where Mikulski and Representatives Van Hollen, Cummings, Hoyer, and the rest of the delegation stand.

Please contact your senators and representatives today and tell them you expect them not to surrender to the cable companies.  When you call, it may be useful to note that President Obama now supports net neutrality (despite appointing a former cable company executive to head the FCC).

This may seem like an arcane subject, but the Internet has been a revolutionary medium precisely because every data bit should be treated equally, so to speak, under the law.  Whatever the carriers will say on Capitol Hill, the fact is that the threat isn’t theoretical — there have already been abuses, from jamming a rock concert with political message to outright censoring of the pro-choice organization NARAL.  We need to clarify and ensure that these things may not happen again, by applying ‘common carrier’ law to the cabling of the Internet in the same way that they apply to highways, telephone networks, and electricity.

This entry was posted in Post and tagged internet. Bookmark the permalink.