Posted on January 8, 2015 by naturallyelsa 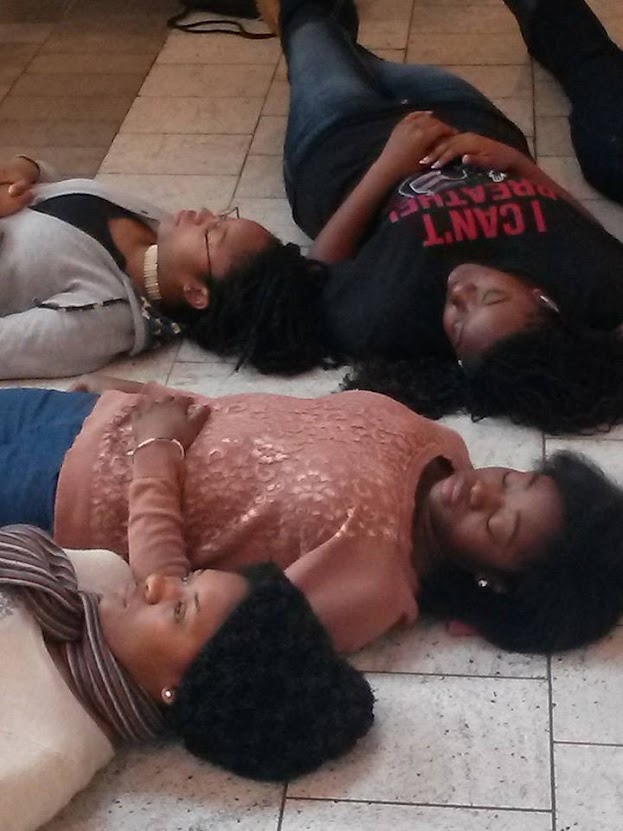 On January 1st 2015, a die-in demonstration took place at Wheaton Mall. The event was entitled #BlackLivesStillMatter for a reason. Personally, I don’t know how many times I have seen the #BlackLivesMatter hashtag.

Even though the message and the statement this hashtag encapsulates is powerful one, it tends to be written off after sometime has passed. It is a sad fact but movements that are fueled through Twitter or any other social media platform tends to not last that long.

There is an unspoken collective declaration made that with the coming of a New Year, it also brings forth a new slate or a fresh start for all of us. And although this “New Year, Fresh Start” mindset brings about a lot of good things, it also threatens the progress we have been trying to make with the #BlackLivesMatter movement. By putting 2014 completely behind us, we are also inadvertently writing off the progress we have been making with this movement. I wish it were that simple for me. I wish I could leave Michael Brown and Tamir Rice behind, but I can’t. I know that it is only a matter of time, before there is another major new media coverage around the death of another Black life taken. And yet again, another name added onto the list. The names of my fallen brothers and sisters will forever be etched into my mind.

If you take off the hashtag in front of that statement, it should ring a message much greater than any trending topic. If only with the coming of a New Year, that also means the end of police brutality and the value of Black lives within this country. But sadly, that isn’t the case.

Even with the coming of a New Year, the problems that have plagued us in 2014 continue to follow us into 2015. And it is on us to keep this movement going. To remember the Black lives that did not have a chance to flip that new page of their life, to celebrate the holidays with their families, and enjoy the prospects of what a New Year had to offer them. That includes, 12-year-old Tamir Rice, 10-year-old Aiyana Stanley-Jones and 43-year-old Eric Garner, just to name a few. All of these lives were snatched away prematurely at the hands of police officers. And the thing that frustrates me the most, is the very fact that the American judicial system refuses to bring in those perpetrators. And moreover, the media that continues to vilify the slain.

I refuse to ring in the 2015 by continuing to stay silent about an issue such as this. And at our last demonstration–more than 40 people who participated let their actions speak for them. To say that they too are sick of seeing Black lives being murdered across this nation, alongside with a “justice” system that continue to not hold anyone accountable for these killings.

So expect more demonstrations, expect more rallies, and protests. A few people may be sick and tired of hearing about this issue or movement, but please understand that this is not just merely a hashtag for some of us–this is our reality. And I refuse to see another one of my innocent brothers’ or sisters’ names added onto the list of lives taken by the hands of police officials.

So we march forth into 2015 — with the same message:
no justice, no peace!