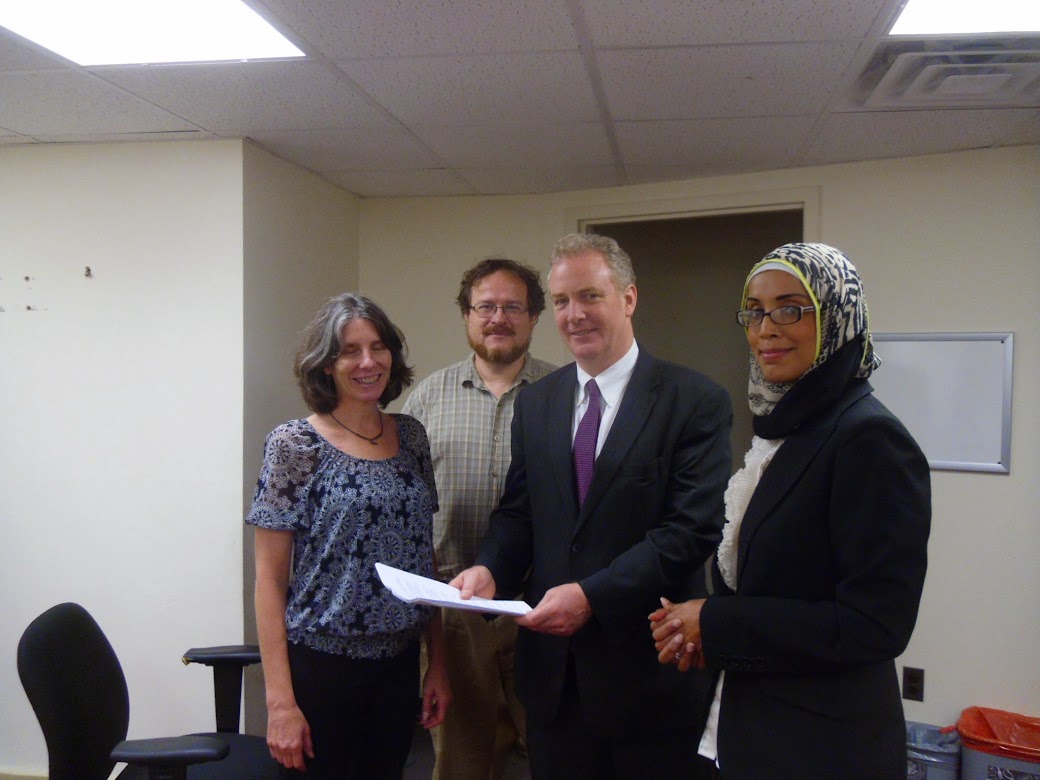 Representatives of local and national national civil liberties groups had a cordial and productive meeting with Representative Chris Van Hollen (D-MD-8) today as they promoted the sweeping surveillance reform and oversight agenda announced in a coalition letter earlier today.

The growing coalition includes the Montgomery County Civil Rights Coalition (MCCRC) and over a hundred other civil liberties and civil rights organizations, including Electronic Frontier Foundation, the ACLU, the Green Party, Get FISA Right, and many more.

Representative Van Hollen noted that he’d voted against both the FISA Amendment Act and PATRIOT Act.*  The Congressman shared the delegation’s concerns about “ambiguity, just the kind of uncertainty we’re seeing now” in what the exact standards are for surveillance under these statutes, and about “offloading that much discretion” to the FISA Court and NSA.  Rep. Van Hollen also believed that there was a big problem with overclassification.  The Congressman described what are currently extremely limited possibilities for informed consent and oversight by non-Intelligence Committee members such as himself, saying “they [Intelligence Committee and/or their witnesses] don’t tell you anything you can’t get from the media even at top secret briefings.”  Van Hollen said he supports Senator Merkley’s Ending Secret Law Act requiring the administration to disclose significant FISA Court legal opinions on expanded authorities under the FISA Amendment Act and other legislation.**

The congressman said that he was less concerned (not unconcerned, but less concerned) that the NSA had the kind of data they had than about the standards and circumstances under which they could query those data.  Thomas Nephew suggested that the combination of vast quantities of “metadata” and powerful new “Watson” computer systems capable of sophisticated analysis made this kind of data collection threatening in its own right.***  Van Hollen agreed that there was potential for concern and abuse with metadata as well as with eavesdropping per se; he noted that people may reach different judgments about the newly revealed methods and procedures and their efficacy as those become clearer.

Stressing that no one opposes warranted surveillance conducted with just cause, Zainab Chaudry raised the issue of NYPD surveillance of American Muslims as an example of why American Muslims are deeply concerned about the likelihood of unequal, heightened, unjustifiable scrutiny simply on the basis of community membership; Rep. Van Hollen was in full agreement. 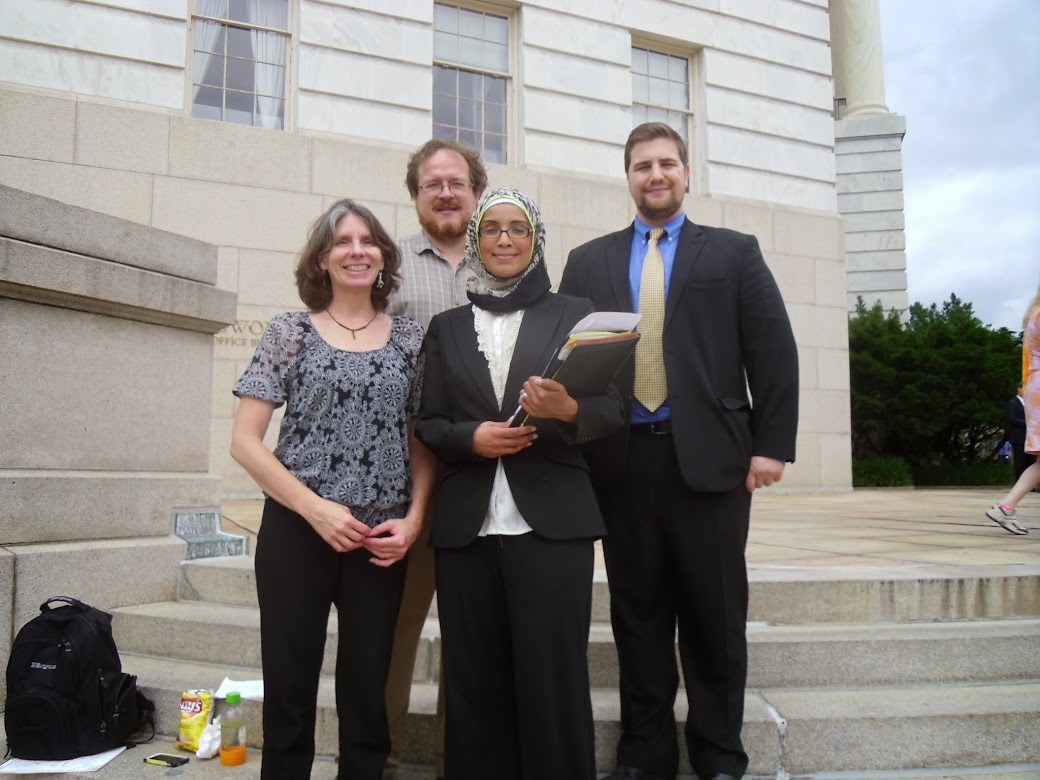 As noted at the outset, the meeting was friendly and cordial throughout. Congressman Van Hollen asked that we stay in touch. I think it’s safe to say we will, and that we’re hopeful the Congressman will be an ally for surveillance reform.

Our meeting with Congressman Van Hollen was scheduled in the wake of this month’s NSA revelations published in the Guardian and Washington Post; it’s just one part of Montgomery County Civil Rights Coalition’s actions in response.  Last week, MCCRC organized a press conference and rally about NSA surveillance on the doorstep of the Russell Senate Office Building; on July 4th, we will be supporting a “Restore the Fourth” rally in Washington, DC.  MCCRC is also organizing delegations to visit Maryland Senators Cardin and Mikulski about this issue.  To let us keep in touch with you about these plans, please subscribe to our mailing list here.

=====
* EDIT, CORRECTION, 6/20: Rep. Van Hollen has not voted for reauthorization of either the FAA or PATRIOT Act., as was originally stated here. During our discussion, he mentioned voting for extensions of some of their provisions; we’re told this was part of a bid to make improvements possible.  I misunderstood his statement to mean he had supported reauthorization, and regret the error.
** The bill “require[s] the Attorney General to disclose each decision, order, or opinion of a Foreign Intelligence Surveillance Court that includes significant legal interpretation of section 501 or 702 of the Foreign Intelligence Surveillance Act of 1978 unless such disclosure is not in the national security interest of the United States and for other purposes.”
*** Nephew cited Using Metadata to Find Paul Revere (Kieran Healy, Duke Univ.) as a useful description of the kind of inferences metadata allow about constitutionally protected activity — for as long as the metadata involved are stored.  To be clear, again, Rep. Van Hollen didn’t dispute that metadata surveillance could be abused. Still, there is also an issue whether more stringent standards (i.e., Fourth Amendment standards) should be imposed not just on querying such data, but on collecting and then storing such data without particularized probable cause in the first place.  UPDATE, 6/25: Regarding NYPD surveillance of Muslims, Nephew mentioned CIA involvement, a relationship the Congressman did not know about.  The NYPD-CIA connection is made in the Pulitzer Prize winning AP series on NYPD surveillance of Muslims, in this article: “With CIA help, NYPD moves covertly in Muslim areas.”