Former Maryland Assembly Delegate Saqib Ali (now government affairs director of CAIR-MD) addressed the audience about the civil liberties challenges faced by American Muslims.  He shared some of the questionable work products of the “Demographics Unit” of the NYPD’s Intelligence Division.  He noted that while civil liberties and human rights abuses have often been begun by the right wing politicians, “liberals and Democrats are often complicit,” pointing out that both nominal Republican Mayor Michael Bloomberg and the principal likely Democratic successors like Christine Quinn have supported the NYPD surveillance measures.

Mr. Ali also discussed the particularly charged issue of informants and infiltration of mosques, and how FBI informants and agents will often cajole and pressure naive, marginal, and/or unstable people into conspiracies they wouldn’t have joined without law enforcement “help.” 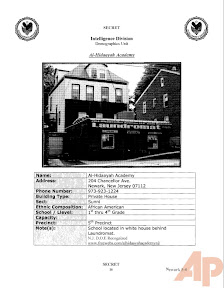 Muslim grade school staked out by New York’s finest; hard to know whether to laugh or cry.

Saqib Ali is Government Affairs director for CAIR Maryland (Council on American Islamic Relations) and has lived in Montgomery County for the past 20 years during which time he earned a Bachelors and Master’s Degree in Computer Science from the University of Maryland. Saqib is a practicing Software Engineer. He is married and has two young daughters. In 2006, after a long history of community activism, Saqib Ali ran for public office. He defeated an 8-year incumbent in a Democratic Primary election to claim a seat in the Maryland House of Delegates. He is the first Muslim ever elected to public office in Maryland.

For more about the forum and links to videos of other speakers, visit Activists survey challenges to dissent at Wheaton forum, propose Rapid Response Network.