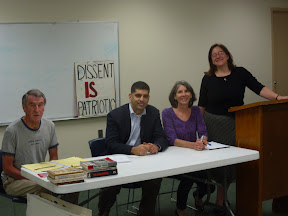 If you’re one of those Americans with a belief or an opinion, you’re at risk these days.

That was the take home message from an excellent panel of activists at Thursday night’s “Defending Dissent: A Public Forum” event at Wheaton Regional Library, hosted by the Montgomery County Civil Rights Coalition and attended by activists and supporters from around the county.

Kit Bonson of the Montgomery County Civil Rights Coalition (MCCRC) emceed the event and introduced each of the speakers (learn about them here).  In her remarks, Ms. Bonson explained how this forum returns to MCCRC’s origins in a 2010 teach-in prompted by raids and grand jury harassment of peace and social justice activists in Chicago and Minnesota earlier that year.  She also described MCCRC’s evolution as a locally focused group actively educating the public and engaging government officials about civil liberties threats and like Metro bag searches, county youth curfew and related ‘loitering‘ proposals, the NDAA, and others, as well as countering harmful propaganda like the “creeping Shariah” myth or the Zero Dark Thirty movie with factual information.

American Muslim challenges
Saqib Ali (Council on American-Islamic Relations of  Maryland) followed with an overview of challenges facing Muslim communities across the U.S., leading off with the infamous NYPD “Demographics” unit that singled out Muslim mosques, community centers, businesses and even elementary schools for surveillance.  The former Maryland state legislator noted that while civil liberties and human rights abuses have often been begun by the right wing politicians, “liberals and Democrats are often complicit,” pointing out that both nominal Republican Mayor Michael Bloomberg and the principal likely Democratic successors like Christine Quinn have supported the NYPD surveillance measures.

He also discussed the particularly charged issue of informants and infiltration of mosques, and how FBI informants and agents will often cajole and pressure naive, marginal, and/or unstable people into conspiracies they wouldn’t have joined without law enforcement “help.”

Peace and death penalty activists targeted
Max Obuszewski (Baltimore Nonviolence Center) provided a personal perspective on the Maryland State Police infiltrations of peace and anti-death penalty groups during the Ehrlich administration.  He pointed out that his story began well before the scandal reached  newspapers and blogs in mid-2008; Mr. Obuszewski’s protests during the late 1990s at the NSA facilities at Fort Meade triggered inquiries by an FBI agent posing as a Baltimore Sun reporter.  The veteran peace activist noted: “We could tell we were being watched.”

While that didn’t stop them, it eventually did result in a legal odyssey to discover just how extensive that completely unjustified surveillance had been: at least 53 activists like Obuszewski found their names in law enforcement databases — often labeled as ‘terrorists’ for their peaceful political advocacy.

Environmental advocacy penalized and chilled
The final speaker, Sue Udry (executive director of the Defending Dissent Foundation), first filled in for scheduled speaker Megan Jenny (Chesapeake Climate Action Network) who was unable to attend.  Ms. Udry led off by describing regrettable legislation like so-called “Ag Gag” laws in some states prohibiting videotaping of agricultural business practices, and particularly the “Animal Enterprise Terrorism Act,” which, as the DDF web site notes, “brands as terrorism any activities that cross a state line and interfere with the operation of an animal enterprise or of any entity that deals with one,” even include mere website posts or peaceful vigils. 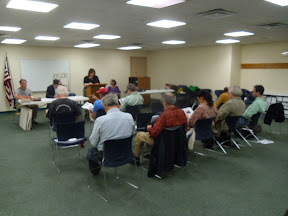 The big picture
In addition to laws specifically targeting forms of activism, Sue Udry noted that law enforcement agencies have also taken it on themselves to infiltrate and surveil legitimate activism.  Examples include the so-called “Fusion Centers” where federal, state, and local law enforcement work together on allegedly “terrorism”-related, but often simply activism-related casework, ICE (Immigration Customs Enforcement) maintaining a watch on peace activism(!),  the DHS contractor “Institute of Terrorism Research” monitoring right- and left-wing “extremism,” and the FBI engaging in entrapment operations against Muslim-Americans, Occupy activists, and political protesters. 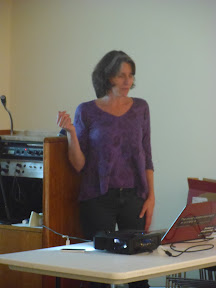 Ms. Udry concluded with where MCCRC began, by speaking about the abuse of “grand juries” as a means to compel testimony by advocates against each other — a key and disturbing feature of what Chicago, Minneapolis, and other activists have faced.

Rapid Response Network
Pointing out, again, that the Maryland State Police spy scandal proves unwarranted government surveillance of First Amendment activities can happen here, and that for example it’s entirely possible that local mosques are being infiltrated by law enforcement without cause, she concluded: “what we need is to be prepared for that.”

With that, Ms. Udry introduced MCCRC’s and DDF’s proposal for a local “Rapid Response Network,” likening it to the more familiar “Pledge of Resistance” model.  While that is used to prepare for specific threats like an Iran War, the nature of the challenge for civil liberties advocates and the response to that is less easily defined: “We don’t know what might happen, what shoe might drop, but we want to have a network that’s ready to respond if a member of our community is targeted.”

Audience Q&A
The presentations were followed by a series of questions from the audience, among them:

We invite you to continue those discussions here!

Each of the video posts also supplies a synopsis, supporting links, and a short bio for the speaker involved.