Let us know you’re coming and invite friends at our Facebook event page; you can also mark your Google calendar here.

What effect has the “The War on Terror” had on free expression and grassroots political organizing in Maryland and across the United States since 9/11?  Come to a public forum sponsored by Montgomery County Civil Rights Coalition and hear from citizen organizers working to advance their causes and protect their rights. 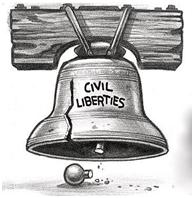 Many people don’t understand how far-reaching the effects of the “war on terror” have been — and not just overseas, but here at home.

In Maryland, for example, we remember the notorious Maryland State Police infiltrations of peace and anti-death penalty groups during the Ehrlich administration.  While that scandal led to some state reforms, the big picture remains bleak.  Overly broad redefinitions of “terrorism” have ensnared environmental and animal rights activists; overzealous prosecutorial practices described variously as “manufactured crimes,” “pre-emptive prosecutions,” and/or simply “entrapment” have been used to make examples of the naive, the unwary, or the unstable.  The result — and the intent — is to intimidate whole communities or movements, from American Muslims to environmentalists to Occupy or anti-war activists.

It’s critically important — not just for us, but for the country as a whole — to resist these practices.  We must not let them chill our determination to profess our own beliefs — religious, political, or otherwise — or to dissent from others we can not agree to, no matter how powerful their advocates may be.  The Montgomery County Civil Rights Coalition will use the forum to propose a “Rapid Response Network” that would bring a diverse coalition of civil liberties, peace, environmental, and other interested groups together as a team any time local activists or others are targeted by local, state or federal agents.

One of our speakers, Sue Udry — executive director of the Defending Dissent Foundation –comments, “I’m looking forward to hearing from our neighbors about the work they are doing to better this world.  It’s important to learn what challenges they are facing, obstacles to their work thrown in their way by our own government.  Too often, tales of government abuse seem far away and from another time.  But we know it hits close to home, and hurts the people we know and admire.”

You can learn more about each of our speakers here.

Let us know you’re coming and invite friends at our Facebook event page.  You can also mark your Google calendar here.  We look forward to seeing you!