Free showing of “Better This World” March 26 at Electric Maid

The Montgomery County Civil Rights Coalition and the Electric Maid Community Exchange continue their collaboration with another free showing of an excellent civil liberties documentary, this time the award-winning “Better This World.” 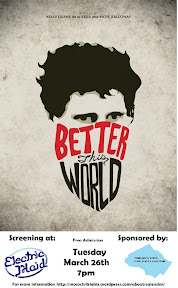 How did two boyhood friends from Midland, Texas wind up arrested on terrorism charges at the 2008 Republican National Convention? Better This World follows the journey of David McKay (22) and Bradley Crowder (23) from political neophytes to accused domestic terrorists with a particular focus on the relationship they develop with a radical activist mentor in the six months leading up to their arrests.

Their mentor turned out to be an informant for the FBI, who manipulated and entrapped them in order to discredit the protesters and justify a massive, militarized police crackdown at the convention.

A dramatic story of idealism, loyalty, crime and betrayal, Better This World goes to the heart of the War on Terror and its impact on civil liberties and political dissent in post-9/11 America.

Let us know you’re coming at our Facebook event page for this screening or in comments here — and join the conversation about the difference between law enforcement and crime production, and between warranted, probable cause based surveillance and unwarranted harassment and entrapment.

= = = = =
Thank you to Electric Maid Community Exchange!
To learn about other events at this great community resource, click the image below.

268 Carroll St. NW, at the DC/Maryland border and across from the Takoma Metro station. electricmaid.org