“If you see Zero Dark Thirty, take twenty minutes and see this movie too.”  That was one of the messages the National Religious Campaign Against Torture (NRCAT) president Linda Gustitus shared at Tuesday’s screening of “Ending U.S.-sponsored Torture Forever” at Takoma Park DC’s “Electric Maid.”

The video (shown above) is part of NRCAT’s “Fact not Fiction” campaign prompted by the release of “Zero Dark Thirty,” a movie that many feel presented torture as justifiable and effective when it was neither. Over a dozen people gathered at the Electric Maid to watch the NRCAT video on Tuesday evening, and then joined in an excellent discussion led by Ms. Gustitus. 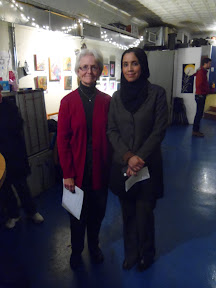 Ms. Gustitus is a former chief of Staff to Armed Services Committee Chairman Senator Carl Levin (MI).  She teaches at American and Georgetown Universities and has been the president of NRCAT since 2007. In her opening remarks, she explained that NRCAT’s number one priority is to get a commission of inquiry about detainee treatment after 9/11, and to hold wrongdoers accountable.  She continued,

“The best option we have for that right now is the Senate Intelligence Committee, which has done a three year investigation into the torture program, and come out with a bipartisan 6,000 page document that apparently, according to those people who have seen it, is very thorough and very compelling.  […]  We’re trying to get that released to the public.  There’s a big push on the CIA’s side to keep it confidential and classified.”

After Ms. Gustitus’s remarks, the subsequent discussion was excellent and touched on a number of important points and references, such as…

This entry was posted in Event, Post, Video and tagged movie, torture, zd30. Bookmark the permalink.