The film “Zero Dark Thirty” has reminded Americans of the fact that torture became a routine tool of U.S. policy during the 2000-2008 Bush administration.   While the movie is a contender for the 2013 “best picture” Oscar award,  MCCRC activists have leafleted theatergoers in the area to inform them of the serious misrepresentations the movie makes about the efficacy and acceptability of torture. 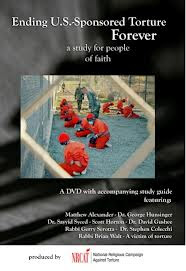 To continue to push back against torture and torture propaganda, MCCRC will now also screen the short documentary “Ending U.S.-Sponsored Torture Forever” on Tuesday, February 26, 7:00pm at the Electric Maid Community Exchange on the DC/Takoma Park border (map), across from the Takoma Metro station.

The movie was produced for the National Religious Campaign Against Torture (NRCAT) as part of its “Fact not Fiction” campaign.   In just twenty minutes, the movie presents a compelling case against torture, both as a moral outrage and as a practical failure.  As a discussion guide puts it, the documentary “describes the torture practices of the U.S. government since 9/11, portrays the lasting effects on the survivors of torture around the world, and offers perspectives from a variety of faiths.”

The screening of the documentary will be followed by a discussion of the film — and we’re honored to announce this will be led by none other than the president of NRCAT, Linda Gustitus, former chief of staff to Armed Services committee chairman Senator Carl Levin (MI) and a professor and lecturer at American and Georgetown Universities.

Beyond the film, we hope viewers will want to discuss what can and must be done to end U.S.-sponsored torture forever.  One first step may be “A Call for the Facts”: a demand that the recent Senate Intelligence Committee report on torture be declassified and released to the public.

= = = = =
Thank you to Electric Maid Community Exchange!
To learn about other events at this great community resource, click the image below.

268 Carroll St. NW, at the DC/Maryland border and across from the Takoma Metro station. electricmaid.org

This entry was posted in Event, Post, Video and tagged movie, torture, zd30. Bookmark the permalink.