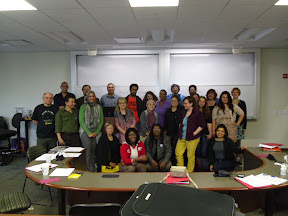 The event was both a kind of “Organizing 101” course and toolkit for beginners like me, a chance to share some of what we’ve been doing here in Montgomery County, and above all a chance to network with other groups, campaigns, coalitions, and activists doing exciting civil rights and civil liberties work around the country.  Many of those groups are now listed under the heading “Network” on the right hand column of this page. 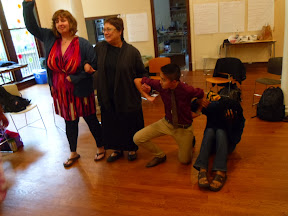 Things started off with mutual introductions — cast as answers to the question “whose shoulders do you stand on?” The point was to get to know each other better, of course, but like many of the ensuing activities, it was also to show how to structure that in the context of building trust and coalitions among people who don’t yet know each other all that well. Another interesting activity was “Image Theater,” something I learned was part of a concept called “Theater of the Oppressed“: using just silent, motionless people and simple props or none at all, create a “sculpture” evoking… whatever you want to evoke.   Some of the ideas people came up with were quite powerful.  I could see using something like this as a way to create conversations near petitioners at a Farmer’s Market, a Metro stop, or elsewhere.

While Friday’s activities took place at a Unitarian Church in the Lake View neighborhood, Saturday and Sunday’s were at Loyola University’s Corboy Law Center in downtown Chicago.  Saturday began with some challenging “where do you stand?” exercises, where participants placed themselves in a hallway along a “strong yes” to “strong no” agree/disagree spectrum for statements like “Jim Crow is as bad as ever,” or “Things are better now that Obama is president”  — and then explain their (literal) position. 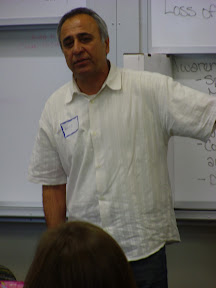 Participants and organizers then got down to brass tacks, beginning with discussions of critical civil rights issues today — e.g., torture, immigration rights/Secure Communities, surveillance, the NDAA indefinite detention threat.  These were more or less brainstorming sessions where participants were challenged to supply “Bad news”/”Good news” items about each topic — the idea being that though bad news on each of these fronts can seem overwhelming, seeing everything at once can help prompt creative ideas about what to do about it.

Activists from around the country also shared accounts of how they were carrying out a number of different kinds of civil rights organizing campaigns.  Among the highlights:

I spoke briefly about our group’s use of interlocking blog, Facebook, Twitter, YouTube, and emailing tools to publicize what we’re doing, alert supporters to next steps, and — occasionally — to “commit journalism,” as when we got Metro Police Chief Taborn’s statement on tape that Metro bag search refusers would be observed and watched.

Needless to say, there were a number of very interesting conversations during the convening: how do you avoid settling for and working for less than you want to accomplish?  Should activists take a back seat to lawyers or elected officials as that’s debated?  Can the idea be to “hold ground” until more help arrives on whatever terms, or should it be to try to own the issues and independently frame debate?  Are coalitions always the way to go?  Who are your coalition members — and who aren’t yet?

Most sessions were videotaped by a key co-sponsor of the event, the Unitarian Universalist Service Committee (UUSC); they also did a number of short interviews with activists at the meeting.  I videotaped many of the sessions as well.  Those videos will be available soon; look for updates here (particularly of activist presentations) and in a few future posts.