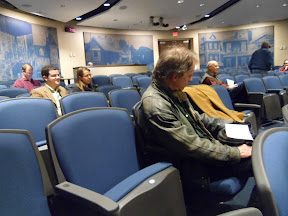 Monday night’s Takoma Park City Council meeting was attended by MCCRC activists advocating the NDAA/AUMF resolution and peace activists for the “Fund our Communities” (FOC) resolution put forward by the coalition of the same name.  Activist numbers and passion were lauded by councilmembers Kay Daniels-Cohen and Fred Schultz during the meeting.

Last week’s forum panelist, National Security Network executive director, and Takoma Park resident Heather Hurlburt spoke first.  She noted both the conservative and progressive movements against the NDAA; coupled with the need to overcome Congressional timidity about the issues at stake, she concluded “there’s rarely been a better time for local resolution that could actually have some impact.”

This resolution is a citizen-initiated response to the concerns raised by the NDAA’s codification of indefinite military detention of civilians captured far from any battlefield – without charge or trial – for the first time in American history.  It allows for people to be locked up indefinitely based on mere suspicion.  The breadth of the NDAA’s worldwide detention authority violates the  5th and 6th Amendments of the United States Constitution, Article III of the Constitution, and international law; it is not limited to people captured in an actual armed conflict, as required by the laws of war. The ACLU encourages the city council of Takoma Park to reaffirm your commitment to these constitutionally protected rights by passing this resolution.  […]

Activists Cyrus Nemati and Chrysantha Rice spoke as well.  Ms. Rice said that the NDAA was a step towards authoritarianism and “if Takoma Park can give it some bad press, I think we should do so.”  Mr. Nemati pointed out that the indefinite detention provisions were introduced and passed quietly, so that letting the American people know about them was one important effect of resolutions like the one proposed for Takoma Park.

Thomas Nephew presented a list of 155 Takoma Park residents — up from 104 the week before — supporting the resolution.  He added:

Some continue to take the view that “non-city issues” aren’t proper subjects of official council concern.  My answer: not if the city charter and municipal code are any guide.  The charter states unambiguously that the city council’s powers “include but are not limited to …  Legislation. To sponsor, promote and otherwise advance legislation at any level, including County, State and Federal; and to expend funds and resources for the same” on behalf of the welfare and happiness of citizens and residents.  Likewise, the municipal code provides for precisely the kind of “simple” resolution we’re proposing.   […]

The NDAA is a huge assault on due process, the rule of law, and civil liberties as we’ve known them.  I’m pleading for Takoma Park to stand tall against it. I again respectfully ask Mayor Williams to place this NDAA resolution on the council agenda.

NDAA resolution advocates owe thanks to the many “Fund Our Communities” advocates on hand Monday night.  They were, of course, informative about the need to reduce U.S. military spending — chair Jean Athey presented a series of charts showing how disproportionate current spending is historically and compared to the rest of the world. They also spoke to the need for Takoma Park’s City Council to continue to consider resolutions of this kind; for example, Mike Tabor noted that “one of the reasons we moved here… was because we knew that Takoma Park was interested in issues beyond its border. […] We expect you to represent us, not to remain quiet, not to remain silent.  […] As a Jewish person… I think of past opportunities where liberals could have spoken up, but for reasons kept silent, and said nothing while people died as a result of their silence.   I think we have an obligation to speak up in the face of moral ugliness beyond our borders, and urge you to do so.”  Likewise, Wally Malakoff — speaking in support of both resolutions — noted that during the civil rights and similar movements “we used every avenue that we could think of to raise our voices.” 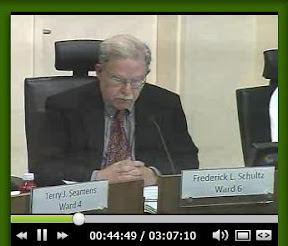 “When Thomas Nephew first came to speak to us on this matter… it was his single voice.  And, I’m just speaking for myself, I didn’t know what the NDAA was.  Now I do.  And I didn’t understand much of what was being spoken about.  And having one voice is better than zero voices, but my feeling at that time was where’s the context, where’s the army of people, how do I figure out how Takoma Park is supposed to be effective.  Over the past several weeks, the numbers have grown, and there’s no substitute for warm bodies in a public forum…. And that’s what you’ve accomplished here tonight on both of these questions.  So I’m in favor of supporting resolutions on both of these items, because I think the case has been well made.”

Mayor Williams indicated that it was “very heartening” to see the support for both resolutions, and that action would be taken very soon.