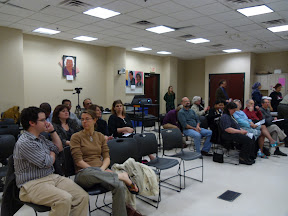 Thomas Nephew welcomed about 35 forum-goers, speaking of the NDAA as a “civil liberties emergency.”  He said that both the forum itself and the NDAA/AUMF resolution that MCCRC is advocating are products of coalition and collaboration: “we built it from two model ordinances developed by the Bill of Rights Defense Committee and the ACLU, and worked with those organizations and the Defending Dissent Foundation to perfect it.  The result is a resolution that has been vetted by some of the best legal minds and civil liberties advocates in the country, and that is explicitly endorsed by the Maryland ACLU, the BORDC, Defending Dissent, and SAALT.”

The movement to oppose the NDAA is proving to be a remarkable cross-section of American politics and diversity, and last night’s audience was no exception.  Two members of the Japanese-American Citizens League reminded the audience that Japanese-Americans were once indefinitely detained without due process; Ron Paul supporters emphasized that they were Constitutional conservatives; Muslim-Americans asked probing questions and noted that they were bearing the brunt of the civil liberties losses of the past decade; Occupy supporters wondered about the connection between NDAA and the Occupy movement — and pointed to the Occupy movement as an example of people taking politics into their own hands.

The forum was a great success in the collaboration that went into publicizing it, in the size and diversity of the audience, and in the quality of the discussion by the speakers, moderator, and the audience; more in future posts.  At least one councilmember, Kay Daniels-Cohen, was enthusiastic about the audience’s engagement with the issue and the possibilities for community action.  Video of the event will be posted soon.