Public forum on the NDAA, April 26th in Takoma Park

Congress couldn’t be bothered to hold hearings on ratifying the indefinite military detention provisions of the recent National Defense Authorization Act (NDAA). So on April 26th, Takoma Park will. 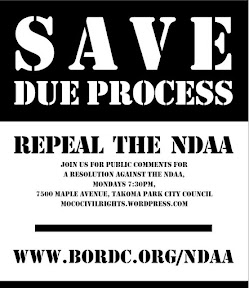 On December 31, 2011, President Obama signed the National Defense Authorization Act (NDAA), codifying indefinite military detention without charge or trial into law for the first time in American history. The NDAA’s dangerous detention provisions would authorize the president — and all future presidents — to order the military to pick up and indefinitely imprison people captured anywhere in the world, far from any battlefield. Including in America.

This won’t be the first time they’ve met to discuss the nexus between national security and civil liberties; Hurlburt and Buttar discussed the growing trend to ‘preemptive prosecutions’ and selective pursuit and prosecutions of Muslim Americans in 2010 on a “bloggingheads.tv” and New York Times video segment titled “Free Speech or Fighting?” 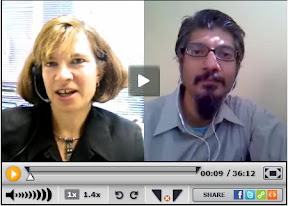 Please join us on Thursday, April 26th for what should be an fascinating, important evening about the direction our country is taking — and what we can do to change that. 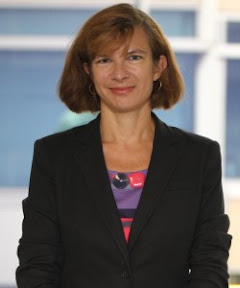 Previously director of a national program to combat racial and religious profiling by federal authorities, Shahid Buttar was also an associate director of the American Constitution Society for Law & Policy. Before pursuing public interest litigation in private practice, Buttar received his J.D. from Stanford Law School in 2003, where he served as executive editor of the Stanford Environmental Law Journal and a teaching assistant for Constitutional Law. Shahid’s comments have been featured by news outlets including The Washington Post, The New York Times, USA Today, CNN, al-Jazeera, FOX News, Agence-France Presse, Huffington Post, Truthout, Democracy Now!, and many others, including dozens of radio stations around the country. He frequently addresses public audiences, including elected bodies, colleges, and law schools, including Stanford, UC-Berkeley, UCLA, the University of Chicago, Northwestern, Carnegie Mellon, and Georgetown.

7 Responses to Public forum on the NDAA, April 26th in Takoma Park