The effort to pass an anti-NDAA indefinite detention resolution in Takoma Park is part of a nationwide movement with many different players.

Yesterday, the Bill of Rights Defense Committee (BORDC) hosted a teleconference highlighting the geographic and political breadth of anti-NDAA campaigns around the country; click on the sound symbol to the right to listen.  Speakers included:

The Tenth Amendment Center’s (TAC) campaign is built around its “Liberty Preservation Act,” which insists that since the NDAA is unconstitutional, states are entitled to nullify it within their jurisdictions; the “Demand Progress” NDAA campaign simply focuses on supporting Diane Feinstein’s “Due Process Guarantee Act of 2011,” a half page long bill whose operative sentence is,

An authorization to use military force, a declaration of war, or any similar authority shall not authorize the detention without charge or trial of a citizen or lawful permanent resident of the United States apprehended in the United States, unless an Act of Congress expressly authorizes such detention.

Both approaches represent incremental, but real and feasible pushback against the NDAA, as do city and county resolutions advocated by BORDC and the ACLU.  As maps like the one below (for BORDC-style resolutions) or those displayed by the Tenth Amendment Center indicate, there is a lot of activity going on around the country. 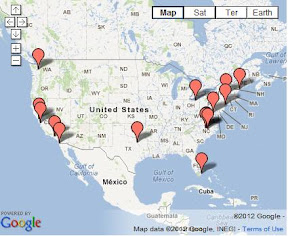 Some readers of this blog, in this fairly “deep blue” part of the country, may feel hesitant about embracing a civil liberties campaign joined by groups on the opposite side of other political battles; to be specific, the Tenth Amendment Center advocates similar nullification legislation against the recent federal health care reforms, for example, which many readers of this blog may well favor.

But I think the most progressive Montgomery County civil liberties advocate might be hard pressed to find fault with the anti-NDAA legislation the organization promotes — and indeed I would urge Maryland readers to contact their delegates and ask them to support the similar Maryland bill HJ0012, introduced by Delegates McDermott (R-Wicomico/Worcester) and Smigiel (R-Cecil).

(UPDATE, NOTE: HJ0012 takes the TAC’s “resolution,” non-nullifying approach to the NDAA’s indefinite detention provisions.)
(UPDATE 2: excellent summary of the phone conference by TAC’s Mike Maharrey — NDAA: “We must resist. We must oppose. We must reverse”.

This entry was posted in Post and tagged coalition, indefinite detention, ordinance. Bookmark the permalink.