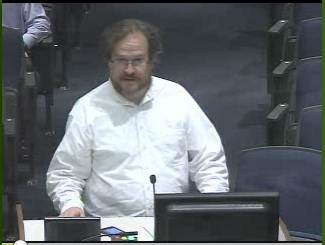 The draft incorporates wording developed by the Bill of Rights Defense Committee (BORDC) and the American Civil Liberties Union (ACLU). My friends in the Montgomery County Civil Rights Coalition and I hope you will study and adopt it, and we look forward to discussing it with all of you.

While the resolution provides a number of justifications for both actions, I will add a few of my own.  The NDAA indefinite detention provisions are a blot on the rule of law in this country, and must be reversed as quickly as possible.  Indefinite detention without trial is something that was forbidden by the Magna Carta; it’s a travesty that our country that prides itself as the protector of freedom should have undone that ancient rule, and it’s a travesty that so little has been done to reverse that mistake.  When our national government fails to protect our freedoms, it must be up to other democratic institutions in our country to advocate them.   I hope that you will.

Thank you very much for your attention to this matter.