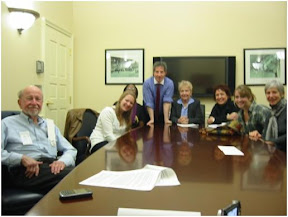 I drove to Annapolis last Monday for the Death Penalty Repeal Rally and Lobby Night hoping this would be the last time I’d have to lobby my Maryland reps on this particular issue.   The event was co-sponsored by organizations Maryland CASE (Citizens Against State Executions), CEDP (Campaign to End the Death Penalty), and Amnesty International, and brought out a diverse group of Marylanders from around the state.   I had an early appointment with my District 20 state delegate Heather Mizeur’s aide so I wasn’t able to attend the entire Repeal Rally kick-off on Lawyers Mall, but was able to talk to a few folks and get a few pics.   Unfortunately I missed hearing Kim Davis, sister of Troy Davis, speak but was able to meet her after the session in the state house later that evening and expressed my condolences for the loss of both her brother Troy and her sister Martina this past year.  Martina Correia, a tireless fighter for her brother, died after a long battle with cancer not long after Troy was executed.

I was also able to meet with delegate Tom Hucker’s aide that afternoon and then held a joint meeting with State Sen. Jamie Raskin and Delegate Sheila Hixson and other Dist 20 citizen lobbyists in Sheila Hixson’s office.  (Jamie Raskin met with us there due to a flood in the James Senate building – hope Jamie’s office is okay/dry by now!)   Holly from our lobby group is on the board of MD CASE.  She reported to our reps that they believe they do have the votes to repeal the death penalty if the bill is allowed out of committee to go to the floor for a vote.   Jamie (now Senate Majority Whip) promised to do all he can to make it happen – we all agreed that this is the year to make this happen!  No more state executions!!  The death penalty is expensive (more so than life in prison) and has been shown time and time again to be racist and arbitrary.

I also lobbied in support of gay marriage and on behalf of MCCRC for more police regulation/accountability including regulations on use of pepper spray, rights to film police activities, and racial profiling measures detailed in the model “Local Civil Rights Restoration Act” (LCRRA) developed by the Bill of Rights Defense Committee (BORDC).  Hixson and Raskin indicated that rather than immediately drafting/sponsoring a pepper spray regulation bill, they’d prefer to first set-up a meeting first with MSP to inquire about current regulations and training and if necessary ask them to voluntarily take up regulations that will ensure that pepper spray is not used on non-violent protestors, children, the elderly, etc.    We also talked about Citizen’s United 2nd anniversary and what state legislatures could do about it.  (Later in the week Jamie Raskin attended a rally urging congress to pass a constitutional amendment to overturn the Supreme’s Court’s ruling allowing unlimited corporate spending on elections. Rep. Chris Van Hollen also attended.) Finally we talked about the indefinite detention provisions of NDAA and our serious concerns as activists that non-violent activism (and journalism about it) is being labeled as terrorism by the authorities.   Our reps indicated that they’d be open to drafting and circulating another letter to our federal congressional delegation expressing concern/outrage over the provisions.

1 Response to Report back on Repeal Death Penalty Lobby Day in Annapolis, Jan 16