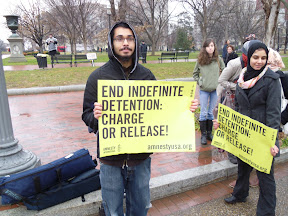 Despite the cold and wet weather last Wednesday, between one and two hundred people made their way to Lafayette Park to protest both the 10th anniversary of detentions at Guantanamo and the recent passage of the NDAA ratifying indefinite detentions. Others protested near Congress and the Supreme Court. I joined the Lafayette Park contingent, and captured a bit of what transpired in photos and video. (The video was shot with a small camera which lost sound when zooming in or back out from a subject; sorry.) The videos, below, are of the protesters, remarks by Naeem Baig (Islamic Circle of North America), and remarks — hip hop style! — by Shahid Buttar (BORDC), who closed with a rousing chant of “Jail John Yoo!  Impeach Jay Bybee!”

Freeahmed.com
Guantanamo isn’t the half of it; while the right to a trial is a prerequisite of justice, it may do little good if the deck is stacked against the defendant.  Americans — often Muslim-Americans — are being put away for decades in American prisons for trumped-up “conspiracy” and “material support” charges. One case I learned of on Wednesday was that of Ahmed Abu Ali, an American resident of Falls Church, Virginia, who was jailed by Saudi Arabia’s Mukhabarat, confessed to conspiracy to terrorism after torture — and whose confession was then used in a U.S. court to put him away first for 30 years and then for life — on a cross-appeal. You can learn more about the case and judge for yourself by visiting freeahmed.com.