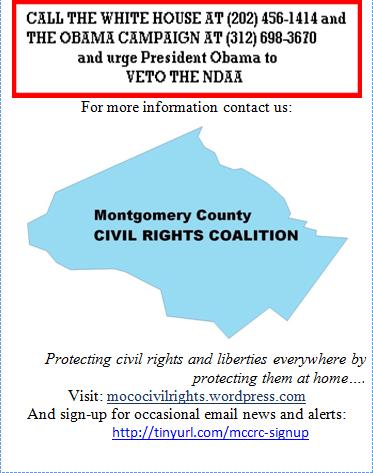 Flyer; please feel free to adapt it for your own use (click links in text)

As promised by Twitter, Facebook, and email, we returned to the Obama Kensington campaign office yesterday to protest the imminent signing of the National Defense Authorization Act.  A cold and windy late winter afternoon probably helped keep our own numbers low – as it turned out, there would be only two of us.  (Thanks, M.!)

To our surprise, though, no Obama volunteers were there either.  A staffer who was checking out around 4:30 — our announced arrival time — claimed that an Internet service outage had caused the office to cancel its scheduled phonebank.  Indeed, the third floor appeared to be dark.

The evening wasn’t a loss; some volunteers exiting the building took our flyers — both the small one depicted here (4-panel front, back), and a longer one similar to last week’s.  We also spoke with a non-volunteer from the same building who heard us out, took our flyers, and expressed strong support. 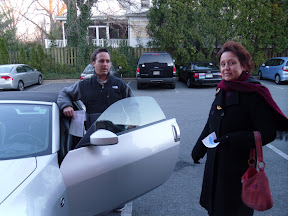 After a brief stint of traffic flyering — approaching cars stopped at red lights — M. and I parted ways for the evening.  When I returned to the Obama campaign office building, I got in my car to wait for any late arriving NDAA protesters.

Instead, at least three more Obama volunteers showed up — only to find their own office abandoned for the evening.  Apparently, they hadn’t been notified of the cancellation.  I gave them all flyers, and gave some extra ones to a volunteer captain who assured me all her friends at the meeting she was going to next would want the information.

It’s certainly no sure thing, but — given the disarray in their operations — maybe the Obama Kensington campaign office chose to quit the field yesterday afternoon, rather than face even a small group of protesters who had made no secret of our intentions.  Regardless of why the phonebank was canceled, it’s too bad — we’ve had nothing but success and pleasant conversations with volunteers so far.  Most agreed with us that the NDAA sounded like a bad idea; perhaps their candidate should listen to them.

Meanwhile, I’ve put a question to local politicians: if a president fails to veto a dangerous, constitution-bending if not unconstitutional piece of legislation like the NDAA, does he deserve our continued support?  It’s one you might ask your own elected representatives, particularly if they’re active in local 2012 general election campaign preparations.

=====
NOTE: For background on what’s wrong with the NDAA — indefinite detentions by the military without trial for whatever is deemed support of terrorism — see the “Further reading” listings at the end of an earlier post.

This entry was posted in Post and tagged indefinite detention, obama. Bookmark the permalink.