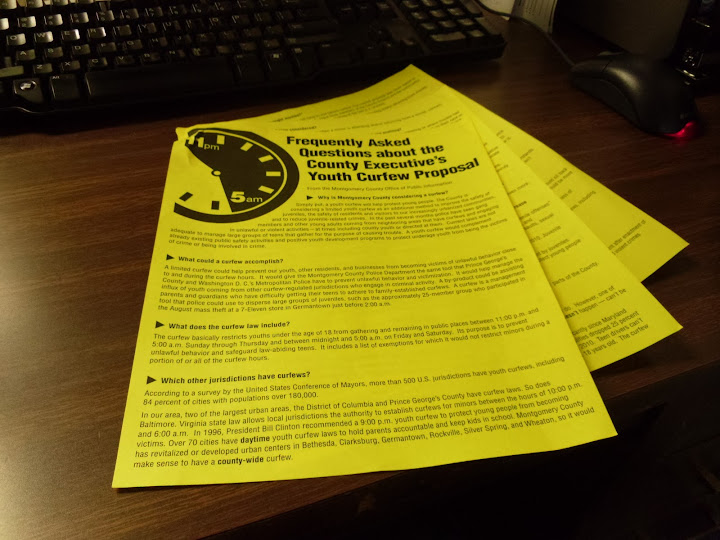 During the Youth Town Hall on Wednesday night, a dense, six page “Frequently Asked Questions about the County Executive’s Youth Curfew Proposal” was distributed to the audience.  The FAQ document is also available online.

The language of the FAQ is usually careful enough to use the word “would” instead of “will be” throughout the document — though sometimes slipping to “is” in secondary paragraphs.  But readers should consider whether it is a proper and fair use of taxpayer money to advocate as strenuously for a curfew as this document does, when the issue is not decided and when many taxpayers equally strenuously object to the proposed measure.  Examples of leading language:

Yet by everything I’ve heard, the vast majority of studies say curfews don’t work, only a handful do.   And it’s obvious from the next statement that the first one is disingenuous anyway — who cares about statistics, says the County Executive, he just wants to do something that *could* make you safer.  Curfew skeptics don’t advocate for Ike Leggett to “sit back and wait,” or for Chief Manger to “stand idly by” before situations “turn ugly” — they do demand that Montgomery County do something sensible, and that it not abrogate anyone’s equal rights to freedom of movement and association under the First, Fourth, and Fourteenth Amendments of the Constitution.

The FAQ concludes by directing readers to http://www.montgomerycountymd.gov/curfew for more information; this turns out to be an equally one-sided presentation of pro-curfew statements by Ike Leggett and others.

The mission of the Office of Public Information — the agency taking credit for the FAQ — is “to provide timely, accurate, and effective communication with the public” and specific county stakeholders such as public officials, businesses, and others.  Each reader can decide whether that is language elastic enough to permit one-sided pieces of advocacy like the FAQ or the “/curfew” page.

It seems disrespectful of the legislative process to be using taxpayer money to manipulate the public on a controversial issue councilmembers have not voted on yet. More importantly, it’s disrespectful of the public.  The Office of Public Information is the same one that provided staff and equipment to televise Wednesday’s Town Hall. It was thus both staging and televising a Youth Town Hall — complete with “APPLAUSE” signals to the audience — to allegedly air an important debate like this one, and simultaneously producing an FAQ placing it and the county squarely on one side of that debate.  It seems unfortunate and wrong that the  youthful, spirited participants in that Town Hall may have been part of a sham event — one that pretended the public still has input to a decision that seems to already have been reached.

UPDATE, 10/17: Meanwhile, if you’re looking for the other side of this debate, check out https://sites.google.com/site/standuptothemococurfew/curfew-facts, and have a look around the rest of the “Stop The Montgomery County Curfew” site.  The great thing about it is you know the high school students who put it together weren’t just doing it for a salary and benefits.

UPDATE, 10/19: “Maryland Juice” suggests curfew skeptics #occupyikeleggettsinbox about this (click the link or email to ike.leggett@montgomerycountymd.gov).

This entry was posted in Post and tagged curfew, governance, moco. Bookmark the permalink.