Activists Thomas Nephew and Sue Udry spoke to members of the renowned Muslim Community Center this Sunday at the invitation of Zaffer Mirza, a trustee of the center and chairman of its Adult Lecture Committee.

The invitation was extended following the Chevy Chase “Creeping Shariah” myth forum co-sponsored and co-organized by MCCRC two weeks ago to push back against an appearance by Fred Grandy elsewhere in Chevy Chase the same day.

Mr. Nephew spoke about patterns of local threats to civil liberties around the country — particularly to those of Muslim Americans or in Maryland.  Examples of real or potential concern included the recently published AP report about the New York Police Department’s surveillance and infiltration of Muslim communities prior to any well-founded suspicion of a crime, and Montgomery County’s “Operation Tripwire,” a local variation on SARs (Suspicious Activity Reports). He also explained the “Civil Rights Restoration Act” that MCCRC advocates, using a slideshow that can also be seen online.

Ms. Udry, the executive director of Defending Dissent, spoke about that group’s efforts to counter growing institutionalized suspicion of Muslim-Americans, whether the notorious FBI training program claiming Muslim Americans are inherently “terrorist sympathizers,” or the “Team B” proposal by Rep. Frank Wolf attempting to create a “Committee to Study Domestic Radicalization” — given Wolf’s history, obvious code for an anti-Muslim witch hunt. 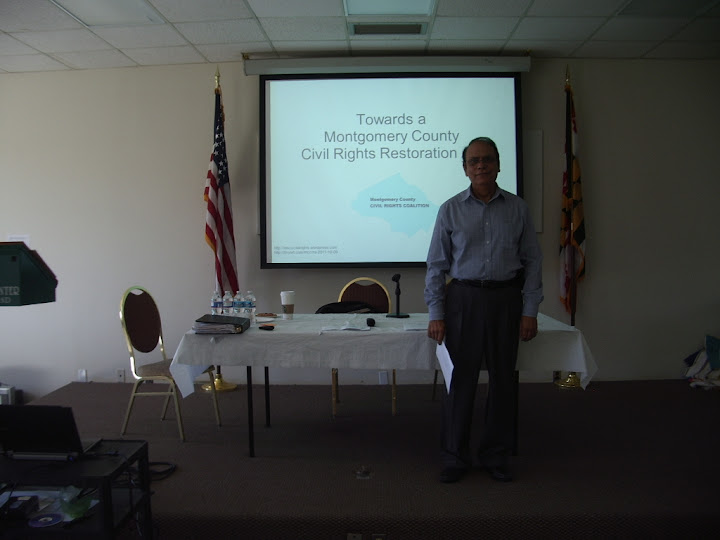 MCCRC activists were also shown around the mosque, including the very impressive, well-equipped and -staffed MCC community clinic.  Mr. Azad Ejaz, the clinic’s executive director, explained that the clinic currently serves about 8,000 clients a year who can’t pay for their treatment, and that about half of those clients are non-Muslim.  The facility boasts a pharmacy and an eye clinic, and will soon add dental services.

We hope to visit more Muslim-American organizations and institutions in the months ahead, and thank Mr. Mirza and MCC very much for having us.