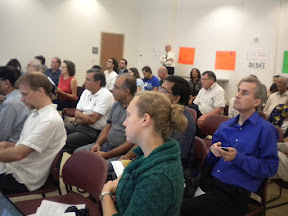 Audience at “Creeping Shariah” myth forum. Click the photo for a photo album of the event

The September 24th forum “Is ‘Creeping Shariah’ a Real Threat or a Trumped Up Scare Tactic?” was held yesterday at the Wisconsin Place Community Recreation Center in Chevy Chase.

Our forum was organized by MCCRC and former Maryland State Delegate Saqib Ali;  both audience and panelist feedback indicates it was very worthwhile and a great success.  The forum’s context was a private appearance, later in the day, by ex-Congressman Fred Grandy — a leading purveyor of Islamophobia and the ‘creeping Shariah’ myth — before a Chevy Chase Republican women’s club.

We were all amazed, gratified, and deeply grateful for the diverse audience of about sixty people who set aside weekend time to join us for this forum.  Thank you all very much for attending! 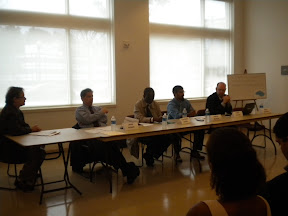 State Senator Jamie Raskin’s remarks can be seen in the above video; videos of all the speakers and a fascinating Q & A period are being gathered at our YouTube playlist ‘Creeping Shariah’ myth forum, 9/24/11, Chevy Chase. 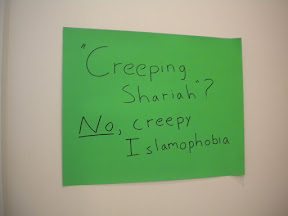 This entry was posted in Post, Video and tagged event, islamophobia, outreach. Bookmark the permalink.