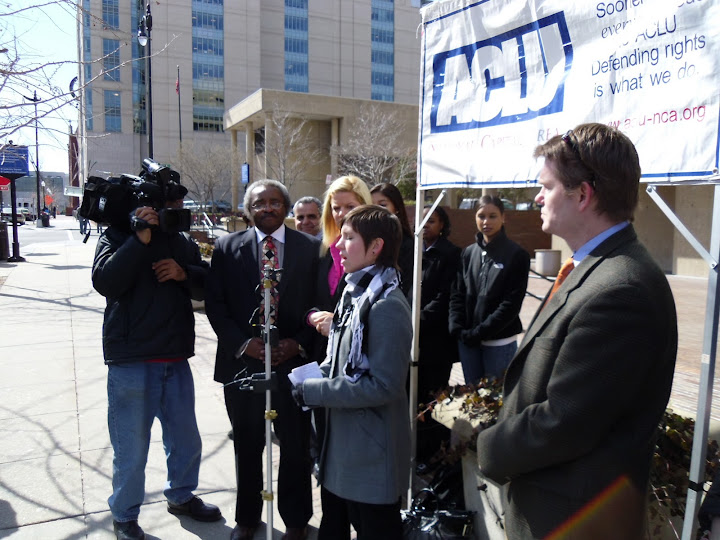 The ACLU-NCA organized a press conference on Thursday in front of the WMATA building to announce a campaign against bag searches, including an appeal for those stopped by bag searches to come forward as witnesses and possible plaintiffs in litigation. MCCRC and DC Civil Liberties Coalition activists joined ACLU-NCA, ACLU-MD, and UDC law student activists in statements opposing the bag search program.

As is our practice, we’ll post individual prepared or transcribed statements, and link to them here. The conference was videotaped, and excerpts will be posted and linked as soon as possible. To see a slideshow, click here.

Johnny Barnes, executive director of the ACLU in the  began the conference by saying “WMATA is on a collision course with the ACLU and its coalition partners, and it could have been avoided,” citing the December letter by the ACLU of the National Capital Area, Maryland, and Virginia.  Noting that no real threat had arisen since 2008 when bag searches were not approved by the board, Barnes pointed out the one thing that had changed in the interim was a Homeland Security grant providing $26 million for a security program – a grant that appears not to have required bag searches, but was used for that purpose all the same. “When you impinge on the Bill of Rights and the Constitution, the ACLU and its coalition partners will respond.” Other comments:

Amy Cruice: “Like most random search policies, this doesn’t make us safer, and instead it violates privacy and risks use of racial profiling.”

Michael German, sixteen year FBI veteran: “This isn’t a matter of sacrificing a little privacy for increased security. This is security theater. It doesn’t do anything to actually increase security, and in fact it diverts resources from what are more effective and proven traditional law enforcement tools using logical investigations based on factual bases. […] Investigating innocent people isn’t going to do anything to help find guilty ones.”

UDC Law School student Aisha Ching emphasized the importance of the Taborn quote publicized by this blog, in which he stated that bag search refusers would be observed and followed. Ching: “…for exercising your right to refuse a search, you can be followed for an indefinite amount of time… That was a point that stood out for me, very differently from what had happened in New York and Boston.”

Ching’s law school colleague Samantha Holley pointed out that the cost of one bag sniffing device would cover half the salary of a beginning Metro Transit police officer — an officer who might have stopped the notorious, brutal beating of a man in L’Enfant Plaza earlier this year. “The thing that I don’t understand is why we aren’t getting more officers out there, using other security measures.”

For my part, I repeated the security theater theme, saying “We want police work — not guess work. We’re not against security — we’re against pretend security.” I also criticized the WMATA board: “It was and is a dereliction of duty for the WMATA board of directors to let this program stand. But if they will not end it, we must.”

Sue Udry said that the coalition would fight the bag searches because “we refuse to be treated like criminals for riding Metro.” She also added, “we will fight because the policy hands Al Qaeda a victory — that here in the nation’s capital, we’ve let fear triumph over common sense and the Constitution.”

Mike Mage drew attention to the condition of the Metro system itself: “I ride the Metro, I walk up and down the broken escalators where people have been injured, I ride over the tracks where passengers and track workers have been killed. If Metro is serious about preventing serious damage, they should concentrate more on fixing their broken system.”

Mary Beth Tinker — like Mage, an ACLU-NCA board member — pointed out that the searches could delay students, and concluded “we should put our efforts into other means of increasing safety, not delaying young students with needless bag searches that are mere theater.”

Barnes closed by announcing a program of hardcopy and online petition gathering and public education launched last week that has expanded to include a symposium about the issue. He also said this: “We’re announcing today that anyone who’s been stopped by the Metro [Transit] Police Department or Homeland Security … should feel free to call the ACLU of the Nation’s Capital and let us know their experience. The number of course is 202-457-0800. And we will gather the facts from those individuals, and if they’re interested in legal recourse, we’ll give consideration to their individual situation.”

This entry was posted in Post, Video and tagged bag search, coalition, wmata. Bookmark the permalink.